The 25th anniversary of the Fall of the Berlin Wall - Fading memory or renewed geopolitical reality? 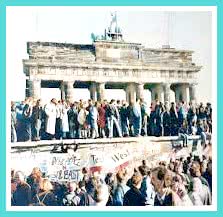 "Today Germany is celebrating the 25th anniversary of the fall of the Berlin Wall. For good reasons the commemoration of the events of November 1989 is a joyous one. On the whole the unification process has been a success: in spite of many fears in the international community at the time Germany has shied away from developing any hegemonic aspirations and has remained a loyal European, Western partner. Domestically the transformation of former Communist East Germany took much longer than expected; it is debatable whether the promise of former Chancellor Kohl in 1989 to establish 'blossoming landscapes' in the former GDR has materialized even after 25 years. High unemployment rates and the exodus of many East Germans moving to the West have left the new Eastern Länder as a relatively deprived part of unified Germany. Still, regardless of the slow 'catch-up' and the billions of dollars invested in the socio-economic development of the East (estimates put this number close to two trillion dollars), over the past years we have seen more promising signs of how the gap between the Western and EasternLänder is - very - gradually closing.

So is the memory of the Berlin Wall and the Iron Curtain diving Europe fast fading; has it become a matter dealt with primarily by historians? This is not yet the case for two reasons: First, as controversial public debates in Germany over the past days have shown, assessing the legacy of the GDR is still a hotly debated issue. Many of the protagonists of the events 25 years ago are still in positions of power and influence. While for the young generation the memory of the division of Germany has become a matter of history books with very little resonance in their current lives, the fight of how these history books ought to be written continuous in public debates. Second, recent events have cast a shadow over the simple narrative of how the Cold War came to an abrupt end in 1989.  Speaking in Berlin the former president of the Soviet Union Mikhail Gorbachev warned that the world was "on the brink of a new cold war" criticizing how the West has handled its relationship to Russia over the past 25 years. The current events in Ukraine are a stark reminder of how the collapse of the Iron Curtain has set forth a development that sees the European continent divided yet again."

Prof. Oliver Schmidtke is director of the Centre for Global Studies at the University of Victoria. He is the is an expert on European and EU politics.
TAGS: media tips, germany, berlin wall
Copyright © 2020 EUCAnet Europe Canada Network. All Rights Reserved.
Joomla! is Free Software released under the GNU General Public License.