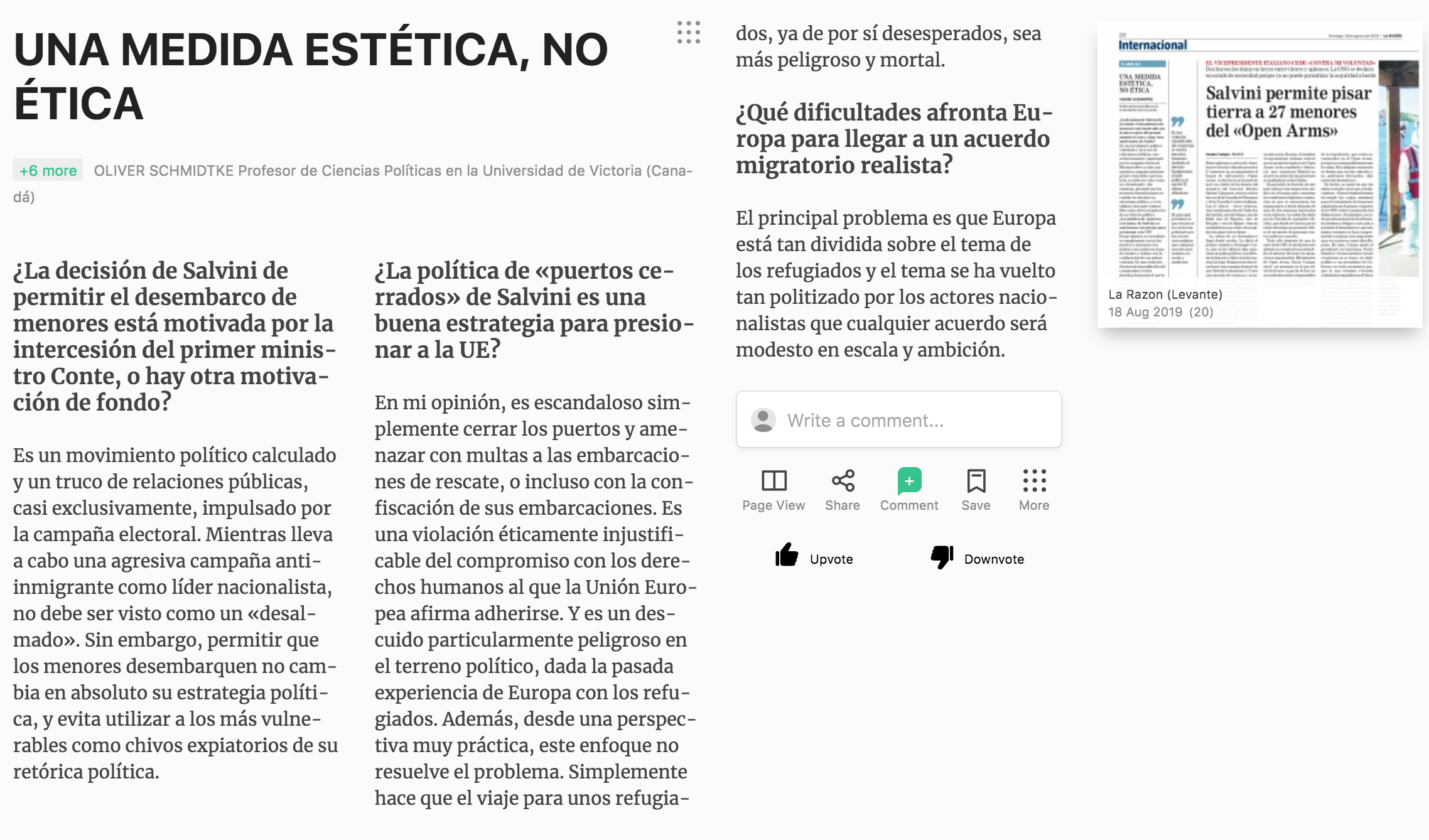 Oliver Schmidtke, Centre of Global Studies at the University of Victoria, extended version in English of an interview with La Razón, Madrid .

What failures has the current European immigration policy? Is rescuing migrants in the Mediterranean and landing them in European ports a good solution?

The current failures reflect the inability of the EU to come up with a coherent and effective response to the ‘refugee crisis’ over the past years. The EU had made some important steps towards a common asylum policy (most notably the Dublin agreement committing the country of first landing to process asylum claims). Yet, given the numbers of irregular migrants trying to reach the shores of Europe the Dublin Agreement collapsed. In addition the 2017 proposal of an EU distribution scheme for refugees across all member states was vigorously opposed in particular by countries in Central and Eastern Europe (not to mention the UK). Until today the EU has not found a proper approach to provide proper support to those countries where most of the irregular migrants land (Italy, Greece, Spain). In the end, the Turkey-EU deal provided a way to ‘externalize’ the problem as it proved to be too controversial and difficult to solve it in terms of a common European approach. Since 2017, the numbers of refugees have dropped dramatically as a consequence of the arrangement with Turkey. Yet the challenge and the political issue have not gone away: There are less migrants trying to cross the Mediterranean but their voyage has become more difficult and deadly. And the European Union is more than ever divided over the issue of irregular migration. Arguably this issue has the potential of fundamentally challenge the EU’s capacity for fair burden-sharing and effective policy making.

This leaves the European Union with difficult choices or, if you want, a conundrum: Not rescuing refugees in the Mediterranean Sea is an ethically unjustifiable violation of the human rights commitment (including the fundamental right to political asylum) that the European Union claims to adhere to. On the other hand, the EU does not have a system in place to deal with the challenge of incoming refugees in a way that would share the burden across the EU and be based on a sense of solidarity among its member states. Instead the issue of refugees and border security has become the ‘bread and butter’  for populist-nationalist actors across Europe fueling anti-EU sentiments.

Is the “safe third country” measure a good strategy for the European case?

In general a ‘safe third country’ approach is a reasonable policy in order to determine whose asylum claims have a reasonable ground to be considered. Yet, the classification of countries as ‘safe’ can be a tricky thing and European countries/ the EU need to evaluate carefully whether indeed it is safe for an asylum claimant to be sent back to the country of origin.

While the French-German initiative (now supported by 14 member states) to find a new ‘solidarity mechanism’ in developing a common approach to govern refugees and asylum claimants, it comes after years of failure and it is widely seen by the most affected countries as insufficient and too late. Still, it is a step into the right direction. It is shameful for Europe to see ships with rescued migrants crossing the Mediterranean Sea in desperate search for a harbour that would accept them. Europe is resourceful enough to deal with the now relatively low number of refugees in an effective and compassionate fashion. The main problem is that Europe is so divided over the refugee issue, migration as an issue has become so politicized by nationalist actors, that any agreement is likely to be rather modest in scale and ambition.

Is Salvini's attitude regarding the "closed ports" policy a good response to the problem?

In my view, it is scandalous to simply close the ports and threaten NGO rescue boats with hefty fines or even with the confiscation of their vessels. It is a betrayal of the fundamental humanitarian values the European Union claims to represent and a politically dangerous neglect of Europe’s past experience with refugees and persecution. And in addition, from a very practical perspective, this approach does not ‘solve’ the problem. It just makes the journey for desperate refugees more dangerous and deadly.

Is Salvini's decision to allow the disembarkation of minors motivated, as he himself has said, by the intercession of President Conte, or is there any background motivation?

This decision is a calculated political move and a public relations stunt almost exclusively driven by electoral politics. Salvini has probably learned from Trump whose approach to children and families at the US-Mexico backfired domestically. While pursuing an aggressive anti-immigrant campaign, even nationalist leader cannot afford to be portrayed as heartless or lacking any compassion. Yet, allowing minors to disembark does not change anything about Salvini’s and the Lega’s political strategy to use the weakest of all migrants, refugees and asylum seekers, as scapegoats in their political mobilization.