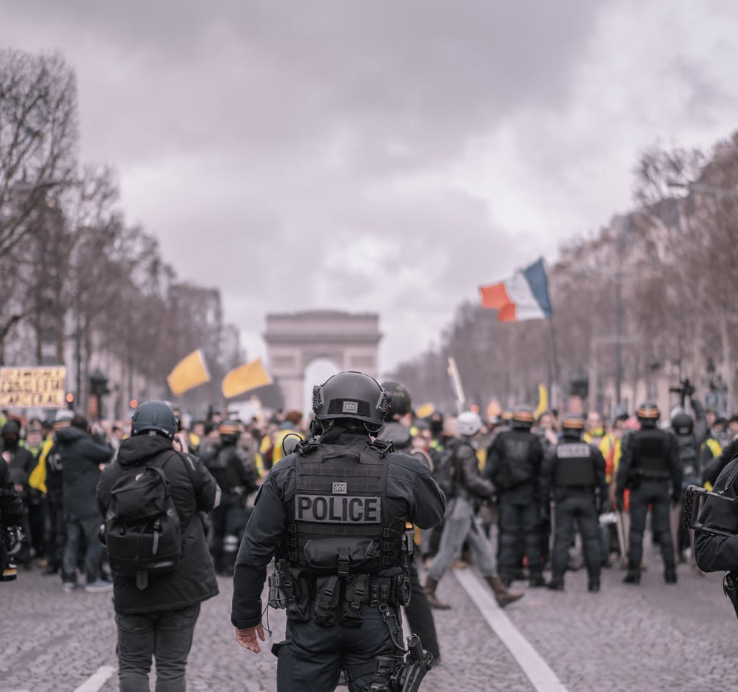 By Benjamin Perrier, Centre for Global Studies at the University of Victoria

France is in the midst of yet another massive political unrest. The Yellow Vest movement, which began in November 2018 - and continues today – is also a driving force behind the current general strike against the planned reform of France’s pension system. The Yellow Vests and the strike against the proposed pension reform are not the same manifestation but the Yellow Vests have supported and participate in the general strike. The Yellow Vests of France are an anti-neoliberalism (against the tax hikes, against privatizations, for the safeguarding of public services) and pro-democracy movement (with the will to establish a citizens' initiative referendum) that claims more justice and dignified living conditions for all and especially for the most precarious and disadvantaged.

The demonstration that took place in France on December 5 was driven by vast opposition against the pension reform envisaged by President Emmanuel Macron and the government of Edouard Philippe. Between 800,000 and 1,500,000 people marched massively throughout France (between 65,000 and 250,000 in Paris according to government and trade union sources). Many unions called for a strike and many different trades found themselves participating (students, teachers, railway workers, firefighters, lawyers, executives, transport, etc.). According to current data, the strike rate in the national education sector has reached between 50% and 70%. This rate has reached more than 80% for train drivers. Generally speaking, between 20% and 45% of public service workers have gone on strike. It is also noteworthy that seven of the eight refineries in the country went on strike.

While the bill is planned for 2020, the gradual implementation of the reform would not be effective until 2025. It is very much a reform project; there is nothing definitive yet and the government has declared its willingness to renegotiate. This reform is in addition to the other social reforms (labor code, unemployment insurance, etc.) already carried out by the Macron administration.

In France, the legal age of retirement is 62 years old and everyone can decide to retire at this age. However, the benefit of a full pension depends on a sufficient contribution period. The general retirement system is based on a pay-as-you-go system. That is, contributions made today by workers (and employers) are used to pay the pensions of current retirees. Current pensions are calculated based on the best 25 years for the private sector and the last 6 months for the public service. In addition to this basic pension, recipients are entitled to a supplementary pension.

What does the government say to justify the pension reform?

Macron claims that his proposed reforms are fair. The longer we live, the longer we have to work. From the government’s perspective, the raison d’etre for the reform is to adapt the current system to changes in life expectancy. In addition, the current pension regime is in deficit. The proposed pension reforms were part of candidate Macron’s platform during the 201X election. . He had promised to create: "a universal system of pensions where a euro contributed gives the same rights, regardless of when it was paid, regardless of the status of the contributor." The pension reforms consist of eliminating the 42 different existing schemes, including the special schemes (SNCF, EDF, RATP, public service, lawyers ...) and the supplementary pension system, with the goal of establishing a universal single retirement system calculated by "points". Workers would receive points (throughout their career and for each hour worked) that will be converted into an annuity at the time of retirement (according to the value of the points accumulated on that date). The current calculation system based on the average annual salary and various contribution rates would disappear. With the reform, it is therefore a question of standardizing the pension calculation for all sectors, public, private, and independent. Pensions will be assessed based on the number of points acquired during a person’s working life. However, the liquidation value of these points could vary and potentially fall (and/or serve as a budgetary adjustment variable). The reform provides for a minimum guarantee of 1000 euros per month (85% of the net minimum wage) that could go beyond the age of "balance" of 64 years. This pivotal age would then invite workers to delay their departure from the work force. The Delevoye report (18 July 2019) gives details of the measures envisaged. However, President Macron said that a mandatory contribution period (the duration of work throughout his life) would be maintained. The reform would not concern current retirees or people who are "less than 5 years" from retirement. The people affected by the reforms will primarily be those born after 1963.

What do strikers and protesters say?

Opponents claim that it is an unfair reform. According to their assessment, there will be more losers than winners. Not all workers have the same life expectancy and workers have a lower life expectancy than, for instance, executives (who live longer in better health). Moreover, the inclusion of the worst years in the calculation will affect the level of pensions. In addition, some professions will be disadvantaged. In particular, public officials (having received no or few bonuses during their career) and beneficiaries of current special schemes. With its desire for uniformity, the reform will move away from taking into account accidents of life, hardship, unemployment, and family situations.. Unions (CGT, FO) are opposed to the point scheme. Another union is in favor of the universal system (CFDT) but is opposed to an extension of working hours. The party of France Insoumise and the French Communist Party denounce the injustice of the system by points and the growing precariousness of the oldest people.

According to polls, 76% of French people were in favor of a reform of the pension system, but 64% say they do not trust Macron's and his government's ability to reform the system. The general strike is planned to be on going.. After being severely repressed by the police and the justice, it is possible that the next iteration of the general strike will restore energy to the popular solidarity movement of the Yellow Vests.