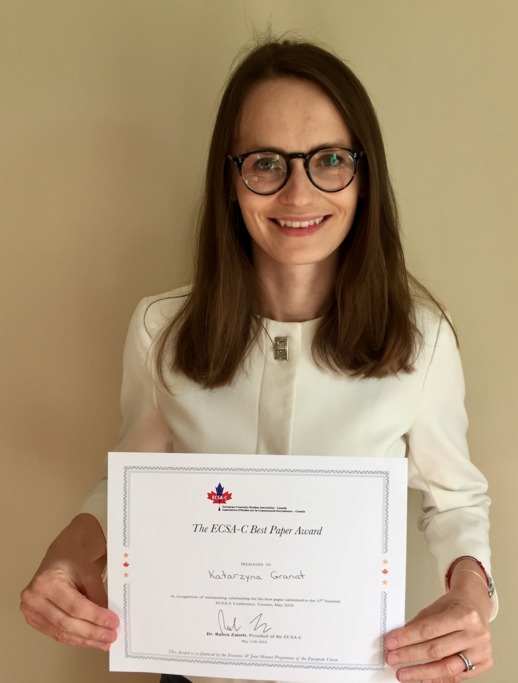 Every two years the European Community Studies Association in Canada selects the best paper that was delivered at the ECSA-C Biennial Conference. Selecting among the 100 papers at the conference in Toronto the ECSA-C award went to

This paper critically reviews and evaluates the European Union’s (EU) experience with the principle of subsidiarity and its policing by national parliaments under the Early Warning System (EWS). A landmark reform launched with the Lisbon Treaty (2009), the EWS was seen as an answer to the EU’s democratic deficit and ‘competence creep’ and an attempt to strengthen perceived federal and democratic safeguards within the EU. This paper presents an analysis of the principle of subsidiarity through the lens of the EWS and the role that the newly empowered national parliaments have played within in the EU on the basis of this system. The main questions this paper addresses are rooted in the practice of the subsidiarity review mechanism as observed thus far, especially, but not limited to, the three ‘yellow cards’ that national parliaments had triggered by the end of 2017. How is the subsidiarity principle understood under the Lisbon Treaty? What is the role of national parliaments in its policing? Why do national parliaments participate in the EWS, and why do they go beyond the narrow role granted by Protocol No 2? And what does this say about the purpose of the EWS? Finally, how does the EWS contribute to improving the EU’s democratic credentials?