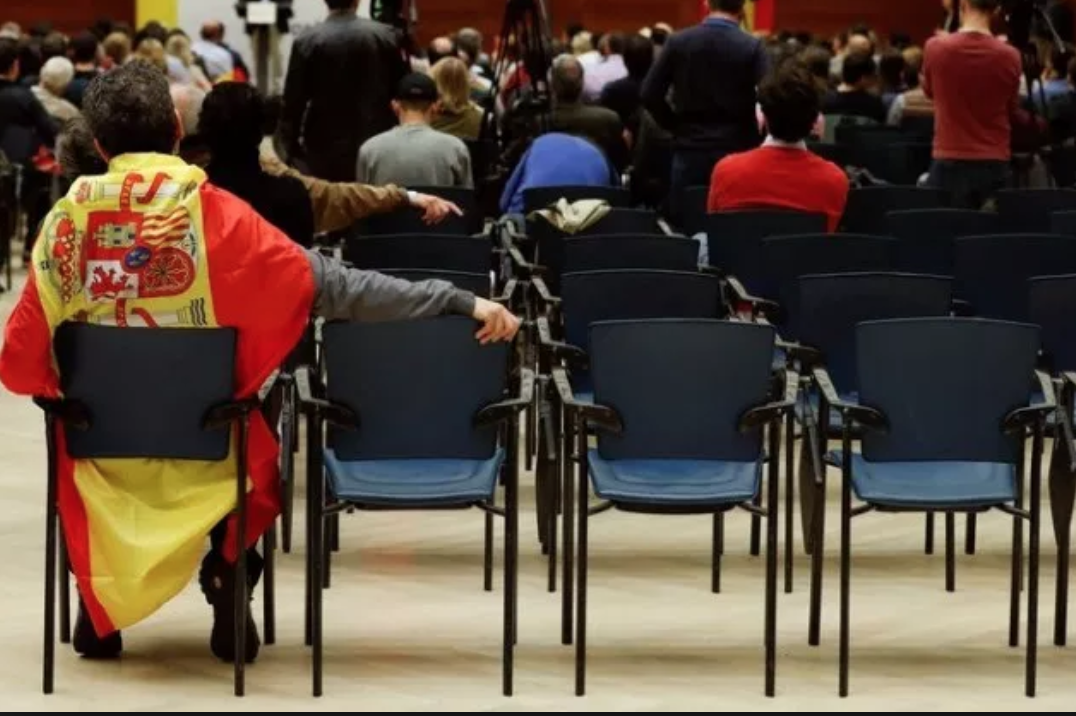 Spain’s presidential debates: Four visions of and for Spain

By Pablo Ouziel, Post-Doctoral Fellow at the Centre for Global Studies at the University of Victoria

On April 28th, Spanish citizens will once again be deciding who will govern their country. Over the last few days four of the presidential candidates have participated in two different televised debates. Following a ruling from the electoral commission, VOX, the new far-right political party that won seats in parliament for the first time in the regional elections of Andalucía in 2018, was banned from participating in the debate. According to the commission, the party should not participate because it currently holds no seats in the national parliament. Notwithstanding, opinion polls suggest that in the upcoming elections, VOX could win 26 of parliament’s 350 seats.

The presidential debates have been intense and have lacked a dialogical ethos. They have resembled a series of simultaneous monologues happening in the same television studio and masquerading as conversation. Nevertheless, amidst accusations, promises, insults and lies, Spanish citizens have had a preview of the style of governance each candidate proposes. Furthermore, the debate has revealed the level of political tension the country is facing as polling day approaches.

At present, it looks unlikely that any of the parties will obtain a majority, therefore, cross-party agreements are going to be necessary. Unfortunately, any agreement is likely to be unstable at a time when the country’s supreme court is judging Catalan politicians and civil-society leaders. Arrested and imprisoned following the Catalan self-determination referendum and the subsequent declaration of independence, 12 people are accused of rebellion, embezzlement and disobedience. Some are facing up to 25 years in prison. With such a trial taking place and such antagonistic positions on the Catalan question, governing Spain is going to be a difficult task. No matter who wins, a large percentage of the population is going to be deeply dissatisfied. Nevertheless, voters need to make a decision, so what do the candidates propose?

During the debate, Ribera told the audience that he is hurt by the fact that Catalonia is now broken. He cannot forget the fact that in Spain there has been a coup d’état instigated by Catalan separatists. For this reason, he is adamant about the fact that his government will be one made up of constitutionalists that will keep separatists and nationalists at bay. According to him, this position is the only way of constructing a country of free and equal citizens and not a nation of nations which is not what Spain should be. He labels his proposal as constitutionalist, liberal and centrist. For Ribera, the Andalusian elections of 2018 have shown that change is possible in Spain. He thinks this is the model that can inspire citizens in the whole country to move forward together. Unfortunately, in his praise of this Andalusian transformation he forgets to mention that VOX is an indispensable partner in the pact between, PP, C’s and VOX that allows the PP to govern the autonomous community. More important for Ribera is the fact that Sanchez became prime minister of Spain with the help of the Catalan coup instigators, and that Pablo Iglesias of Podemos is always aligning with those who want to break-up Spain. Ribera thinks this must stop, and he advocates for citizens to break the silence imposed by Catalan separatists. His ultimate promise is that his government will not pardon those who have tried to break-up Spain.

As far as his policies go, he guarantees a flexible labour market; the elimination of the ‘death tax’; an anti-squat law that protects families; and a substantial public investment designed to increase the number of births in Spain.

During the debates, Casado told the audience repeatedly not to divide the vote by voting for Cs. As he puts it, if the vote is divided the separatists win. For Casado what is important is to take Spain out of the economic and territorial crisis in which it is submerged. This, he suggests, only his party has the capacity to achieve. He has an array of measures designed to address the crisis. If he governs, he will ban educational indoctrination in Catalonian schools. He will also make sure that the penal code punishes those who dare to insult Spanish symbols such as the country’s flag or its national anthem. In addition, Casado guarantees that under his watch there will be no public money going to those being judged for rebellion and sedition and presenting themselves to elections.

Regarding economic matters, he has no doubt about the fact that in order to create employment one needs to lower taxes. Regarding the family unit, he does not hesitate when suggesting that in order to defend the traditional family structure, a maternity law that stops the 100,000 abortions happening in Spain every year needs to be created. When speaking about solving rental market problems, Casado proposes passing legislation that protects homeowners and encourages them to rent their empty properties. He wants to resolve the problem of irregular immigration through hard and secure borders, and through strengthening regulated immigration linked to the labour market. Like Ribera, Casado also proposes an anti-squat law, but he is more specific than Ribera, suggesting that squatters should face 1-3-year in prison. Without a doubt, for Casado the security forces are a priority; he is adamant about the need to protect the National Police, the Guardia Civil and prison officers. In closing the debate, Casado emphasizes that it is not the PP that is the most corrupt political party in Spain but the PSOE. He finishes by stating that during his time as prime minister, Sanchez has entered into pacts with the Catalan coup instigators, with pro-ETA Euskadi Ta Askatasuna (Basque Homeland and Freedom) political parties, and with Podemos. As he puts it, Sanchez has humiliated Spain in front of the coup instigators.

Sanchez began the debate by asking what country Spanish people want? Is it a country in which everyone fits or one in which only the Columbus Trio fits? This is in reference to a demonstration ‘For the Unity of Spain’ which took place in February, and in which the three right wing parties (PP, C’s, VOX) met at Columbus square in Madrid to demand early elections. According to Sanchez, the Columbus Trio is what everyone should be wanting to prevent. For him, Spain is great when it recognizes itself in its diversity, and this is what the PSOE can guarantee. Sanchez, wants to work on conviviality, he wants to clean up corruption in Spanish politics, and wants to end the ‘Patriotic Police’ that has been operating outside of the law and against political parties.

His position on Catalonia is simple, those seeking independence need to return to the institutional and statuary path. He is also clear about the fact that there is not going to be an independence referendum as long as he is the country’s prime minister. For Sanchez, there can be no dialogue outside of the constitution, and he refuses to speak of pardoning the Catalan independence leaders until there is a firm sentence from the supreme court.

Shifting the debate towards gender violence and speaking to Casado and Ribera, he points out that the enemy of feminism is not man but patriarchy, and suggests that what is needed is a governmental agreement on gender violence. Moving to pensions, he proposes a constitutional reform to protect the public pension system. With respect to education, he proposes a modernization plan in which there will be more scholarships for students. In terms of housing, he proposes an increase in social housing which includes quality properties for rent or purchase.

What Sanchez is ultimately calling for is what he refers to as a social no-confidence vote against corruption, inequality and political confrontation.

Iglesias entered the debate by reminding people that the breaking-up of Spain is happening due to the revolving doors that go from government to the executive boards of large corporations. This break-up is further aided by the unnecessary privatization of profitable public companies. This he calls corruption. He actually suggests that corruption has become a form of government in Spain, which can only be stopped by a progressive left government. For Iglesias, it is not just about winning but also about convincing. As he himself suggests, ultimately his proposal is not as radical as people think; it just requires that those in government follow the constitution. He sees himself following the mandate given to political leaders by the Women’s Day marches of March 8th, the ongoing pensioner marches, and the calls from the Youth Climate Strike. What Spain needs, according to Iglesias, is more dialogue, more empathy, fewer insults and a little less shouting. For Iglesias, the fact that there was such a thing as the Patriotic police reveals a deep problem in Spanish democracy. The same can be said of the fact that 28% of public investment in health is going into the private health sector. Regarding electric companies, he says that they need to be pressured to provide lower prices. He also sees excessive power of the Catholic Church in the public-school system.

Concrete policies that he suggests, include raising the minimum wage; lowering retirement age to 65; providing minimum pensions of 600 euros; and offering free education at all levels (primary, secondary, polytechnics and universities). Ultimately, for Iglesias, in these elections people are choosing between a coalition government formed by Ciudadanos, Vox and PP, or a coalition government between PSOE and Podemos. He does see a third option, which he calls the option of the banking system. The ‘third option’ refers to a potential coalition between PSOE and Cs, which if successful would see an emboldened and far more neoliberal PSOE.

Spain is immersed in a deep crisis and these elections are happening after Sanchez, unable to approve the budget, called early elections. His tenure has lasted for only nine months; following a no-confidence vote against ex-prime minister Mariano Rajoy of the PP. This was the first successful no-confidence vote in Spain’s short democratic history; it was deeply tied to the corruption scandals affecting the governing party. Corruption in Spain is endemic, and the Catalan question is far from being resolved. With all that is happening in the country and judging by the disappointing quality of the presidential candidates and their inability to speak-with each other, it seems that on the institutional representation front Spanish citizens cannot be too optimistic. Perhaps Unidas Podemos offers a safety net of sorts, but I assume that following the debates many in Spain will be wondering what democracy beyond the sole focus on the state and national parties could look like.