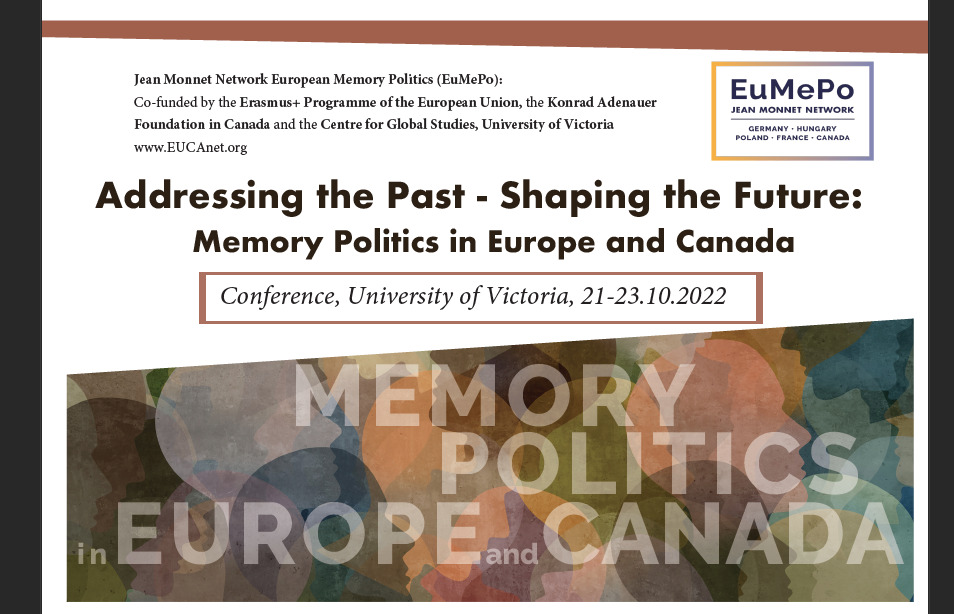 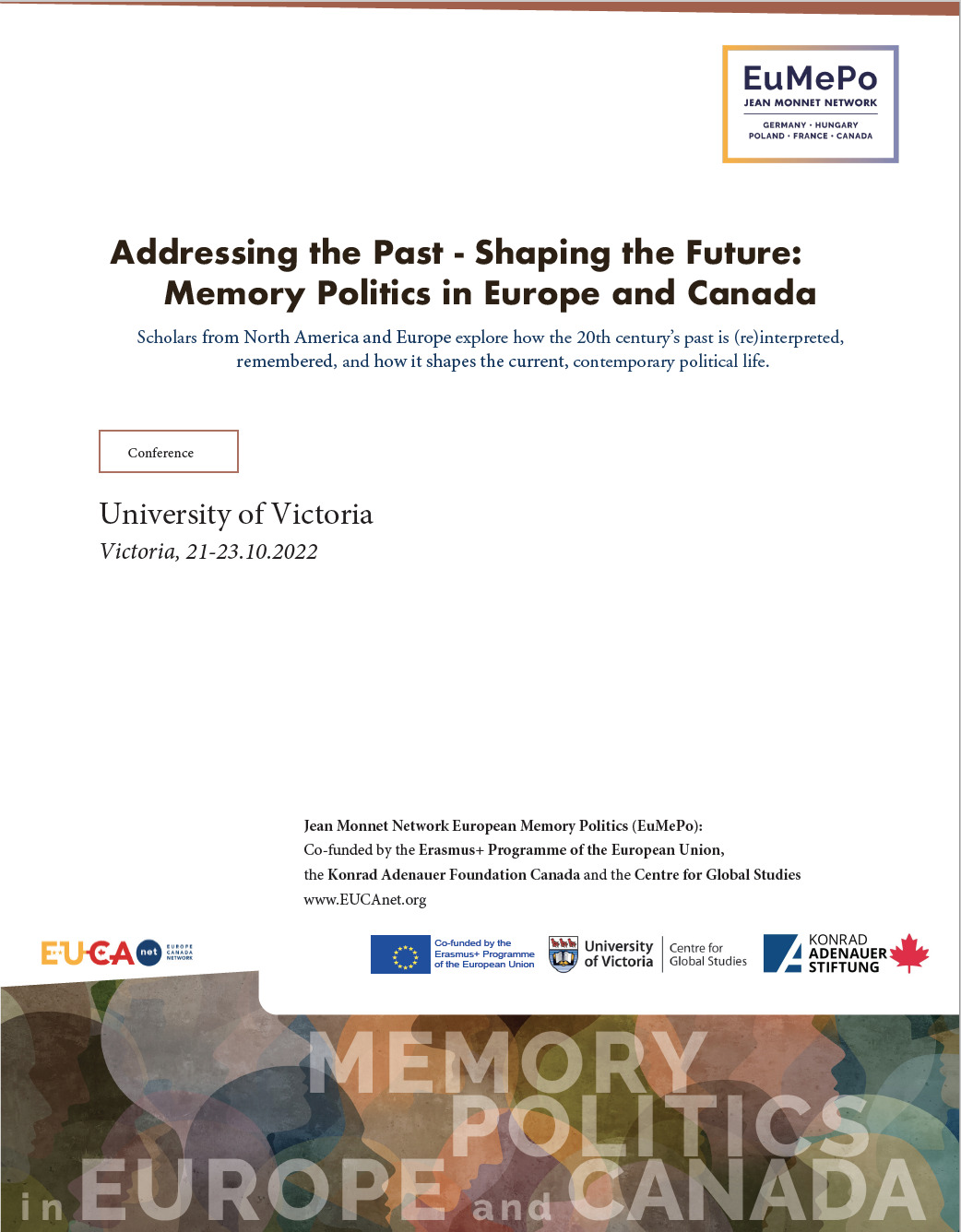 Addressing the Past – Shaping the Future:

Memory politics in Europe and Canada

What role does memory politics play
in sustaining democracy and social inclusion?

Winners of the Graduate Essay Contests and the Conference Award discuss their contributions to the debate on how memory and identity are integral to understanding society and politics in today’s world. The graduate student panel will focus on how history is currently interpreted in Europe and Canada focusing in particular on the memory of the continent’s totalitarian past, the recollection of the World Wars, Fascism, the Holocaust, Colonialism, the legacy of Communism and the Cold War Divide. The panel will also address the new study “The Legacy of Canada’s Residential School System – Addressing Past Injustices from a Canadian-German Perspective” and the question how the ‘cultural genocide’ towards Indigenous Peoples in Canada could be related to addressing past injustices in Europe. The main purpose of this discussion will be to explore comparative perspective in how societies address past injustices and what impact the commemoration of the past has on the polity.

Panel: Confronting Canada’s Legacy of Colonialism and the Residential School System: The Troubled Path towards Reconciliation

This panel will explore how Canadian society has commemorated its treatment of Indigenous Peoples and addressed its colonial legacy socially and politically. With the discovery of unmarked graves at former Residential Schools, the need to respond properly to this legacy has gained renewed urgency and led to a vigorous debate about what could be effective and legitimate paths towards reconciliation.

Session 1, 9:00-10:30 am: The Practices and Legacy of ‘Mastering the Past’ in Germany: Accomplishments and Challenges

This session will reflect how German political authorities and society have addressed the Holocaust and the legacy of the Third Reich with a particular emphasis on how we can relate this legacy of addressing the past to other contexts. What can the German context tell us about the appropriate way of commemorating past injustice, are there practices that have proven productively productive in this respect; what challenges does Germany face to keep the memory of the Holocaust but also its colonial past alive in the 21st Century?

With the end of Communism and the gradual integration into the European Union, Central and Eastern European countries have redefined what national identity, sovereignty and political community means by invoking key historic events. What we have witnessed in certain cases is a strong emphasis on national identity and the use of collective memory in nationalist-populist mobilization. This session will address what is driving this kind of memory politics, what it intends to achieve and how we should evaluate its trajectory in changing EUS societies.

This session will focus on the complexity of memory politics in contemporary Europe: On the one hand, the European Union has embarked on an attempt to popularize a European Memory that could serve as the political-cultural basis for the European integration project. On the other hand, many EU member states still struggle with coming to terms with their collective experience of the 20th Century also with a view to the widely neglected commemoration of Europe’s colonial past.

Plenary discussion: The Politics of Memory and the War in Ukraine

The Russian attack on Ukraine is a dramatic event in which historic narratives are mustered to justify war and occupation. Reference to the 20th Century key events such as the Soviet fight against Hitler’s Germany has become a critical element in the Kremlin’s propaganda questioning the legitimacy of Ukraine as an independent state and denouncing the country’s leadership as ‘Nazis’. This panel will address how and with what political goals history is being mobilized in Russia and Ukraine.