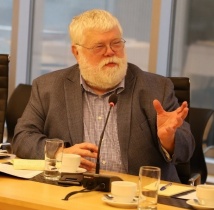 Robert Finbow is Professor and Honours Coordinator in the Department of Political Science at Dalhousie University.  He is also Deputy Director, Jean Monnet European Union Centre of Excellence and Director of the Erasmus + CETA Implementation and Implications Project.  Professor Finbow’s research focuses on labour and social issues and trade in North America and Europe; and implementation of the Canada-EU Economic and Trade Agreement (CETA). He also does research on comparative regional development in North America. His focus recently has been on the Canada-European Economic and Trade Agreement, especially the implications for social policy and federalism.  He teaches on comparative politics and theory, Latin America, Canadian regionalism and political economy. He has published on EU trade and social policy, labour and environmental aspects of NAFTA, comparative health care and social policy, comparative North American political cultures and Atlantic Canadian regionalism.