Conference Report: Constitutionalism in the Age of Populism

The international conference was held at the University of Victoria in March 2020 just before the COVID-19 lockdown. It was organized jointly by the EUCAnet Initiative, the Cedar Trees Institute at the Centre for Global Studies, and the Faculty of Law at the University of Victoria. While the grant of the European Union awarded to Oliver Schmidtke, the Centre for Global Studies infrastructure and the SSHRC Connection grant secured by Jeremy Webber allowed for the base funding of this event, the contributions of the Cedar Trees Institute, the Faculties of Humanities and Social Sciences at the University of Victoria as well as the support of ELTE University and University of New South Wales were crucial for its success. This report allows the participants and other readers to reflect on the topics that were brought up by scholars from around the world just before the COVID-19 lockdown forced the international exchange into the digital world. Find all the abstracts in our conference Report II or directly on our CEDoD project website. A fully accessible video archive is available on YouTube.

Contributions to the Conference:

Adam Czarnota: Between Liberalism and Populism: Central-Eastern European States on the Road to Post-Conventional Constitutionalism

Daniel Weinstock: Global Responses to Populism and its Causes

Esztar Bodner : The Role of International Institutions in the Protection of Constitutionalism

Hoi Kong: Colonialism, Constituent Power and Referendums: When is Popular Sovereignty not Populist?

Jeremy Webber: Cutting our Way through the Thicket: Populism, its Affinities, its Consequences, and our Responses

John Erik Fossum:  Populism and the Question of EU Reform

Michał Stambulski: The (Im)Possibility of Populist Jurisprudence. Lessons from Poland

Oliver Schmidtke: Populism as an Illiberal Response to the Crisis of Democracy: Exploring the Link between Popular Sovereignty and Liberal Rights

Peter Kraus: Populism versus Popular Republicanism on the Battleground of Diversity

Richard Bellamy: When is Democracy Constitutional?

Silvia Suteu: Friends or Foes? The Uncertain Relationship of Eternity Clauses and Populism

Zoltán Pozsár-Szentmiklósy: Informal, Democratic Structures and the Control of the Central Political Power 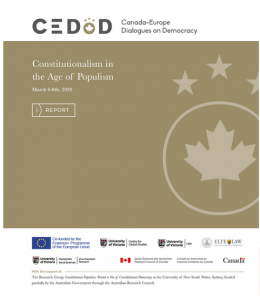 Prof. James Tully: The Roots of Modern Democracy and the Need for Participatory...

Politicizing Social Inequality: Competing Narratives From the AfD and Stand...
Scroll to top