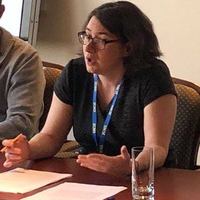 Sabrina Paillé is a PhD student in sociology at York University, where she is also pursuing a Graduate Diploma Program in German and European Studies. She is a Visiting Student in the Department of Sociology and Social Anthropology at Central European University, Budapest, Hungary in fall 2018. She holds a MA in sociology from Université du Québec à Montréal, Montreal.

Sabrina Paillé’s MA thesis focused on the way in which the relationship between Nazism and Modernity has been theorized in sociology. It explored the tensions between approaches that interpret National Socialism as an anti-modern phenomenon and those that interpret it as a product of modernity. It paid a particular attention to the relationship between geopolitical contexts, politics of memory and paradigm shifts in the social sciences.

Sabrina Paillé is on the governing board of the Young Researchers Network of the European Community Studies Association Canada.