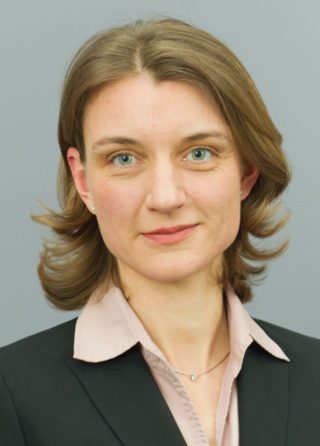 Dr. Daniela Schwarzer is director of the DGAP (Deutsche Gesellschaft für Auswärtige Politik). She previously was an executive team member of the German Marshall Fund of the United States, serving as GMF’s senior director of research and heading GMF’s Berlin office as well as its Europe program. Previously, Schwarzer headed the European Integration Division at the Stiftung Wissenschaft und Politik (SWP, the German Institute for International and Security Affairs), from 2008-14. She joined SWP in 2005 as a senior fellow.

In February 2014, Schwarzer was appointed a senior research professor at SAIS, John Hopkins, DC/Bologna. In 2012-13, she was a Fritz Thyssen scholar at Harvard University’s Weatherhead Center for International Affairs and a non-resident fellow of the Transatlantic Academy at GMF. She has been an adjunct faculty member of the Hertie School of Governance in Berlin since 2010 and has taught in graduate programs in universities in Europe and China since 2001.
Daniela Schwarzer has a particular focus on euro area issues, financial and debt crises, questions of democratic legitimacy and transition, France, and Germany. She has held advisory positions for the French and Polish governments. In 2007-08, she was a member of the “Europe” working group of the Whitebook Commission on Foreign and European Policy in the French Foreign Ministry. From 1999 to 2004, she served as editorialist and France correspondent for the Financial Times Deutschland. Prior to this, 1996 to 1999, she was analyst and later head of the information department with a Paris-based association of leading European companies and banks.