In January 2020, the CEDoD project launched its Young Scholar Essay Contest: POPULISM: a corrective or a threat to democracy?

Graduate, doctoral, and recent post-doctoral students enrolled or employed at a university in Canada submitted essays for adjudication. The adjudication panel decided unanimously to award Thibault Biscahie, a PhD Candidate at York University, for his contribution: The Democratic Limits of “Anti-Populism”.

In a video produced during the March 2020 conference, Thibault Biscahie,  discusses how populism is neither a corrective or threat to democracy in itself. He views the concept as strictly dependent on the very specific social, cultural and economic context in which populism emerges and develops. Biscahie contends that it is anti-populism that is more detrimental for democracy. Talking about the findings of his essay, he explains that to study anti-populism he has applied three main ways of talking about populism – populism as an ideology, as a strategy and a discourse.

Honorable mentions of the essayists included: *** Hungary’s Populist-Nationalist Discourse: Bridging Supply and Demand Factors, by Phillip Swallow, MA student with the European Russian and Eurasian Studies (EURUS) program at the  Carleton University*** Illiberal Democracy and Reimagined Nationalism: Hungary’s Border Security Policies, by Kristen Csenkey, PhD in Global Governance (WLU) at the Balsillie School of International Affairs and *** Populism – a corrective or a threat to democracy?, by Laurence Claussen, MA student in the Department for Political Science at the University of British Columbia. 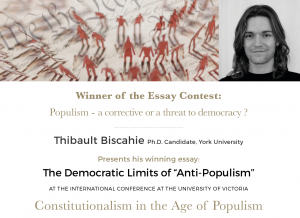 The Death of Diplomacy? Opportunities for EU Democracies in a Foreign Service...
Scroll to top