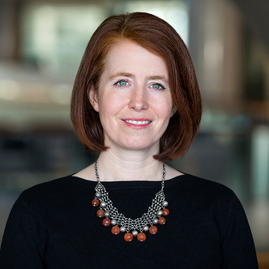 Anoush Fraser Terjanian currently serves as the Assistant Vice Dean, Partnerships and Research Networks, at the uOttawa Faculty of Social Sciences, and Research Associate at the Centre for International Policy Studies, uOttawa. Her research and teaching focus on 18th-century France—birthplace of political and economic theories under renewed critical evaluation, namely modern democracy and capitalism. She trained at Johns Hopkins, l’ÉHÉSS (Paris), Cambridge, and McGill universities.

In 2015-17, Terjanian served (on secondment) as the founding Director of the US Social Science Research Council’s Anxieties of Democracy program. In that role she collaborated with an eminent Advisory Committee to design, fund, promote, and manage this international venture seeking to incubate and broadcast a better understanding of the dilemmas of legitimacy and capacity faced by established democracies. Mobilising an intentionally diverse team of over 75 top-tier social scientists, journalists, and practitioners to ‘smart up the public conversation about democracy with fresh social science’, Terjanian superintended innovative public programming and communications strategies to champion the civic role of university research to a broad public.

Born and raised in Canada, and having lived and studied in Egypt, England, France, and Italy, Terjanian brings an international perspective to her work. Her interest in governance and democratic institutions is longstanding: Terjanian is an alumna of Canada’s non-partisan Parliamentary Internship Programme, where she worked with Members of Parliament from both sides of the House. She later served in the Intergovernmental Affairs Secretariat at PCO, and on Canada’s G7 Summit delegation as a Summit Officer in the Department of Foreign Affairs and International Trade. Terjanian is the author of Commerce and Its Discontents in Eighteenth-Century French Political Thought, re-released in paperback by Cambridge University Press in August 2016. In 2018, she was appointed to the Governing Council of the Social Sciences and Humanities Research Council of Canada.

Terjanian’s current research projects include work on cosmopolitanism and political economy, and an edition of the first history (and critique) of early modern European imperialism. Her work on democracy focuses on what she is calling the ‘bewilderment paradigm’; building on examinations of ‘unknowing’ in postcolonial analyses, this project investigates what it means when the sovereign dēmos experiences, or claims to experience, insufficient knowledge to act civically or democratically.