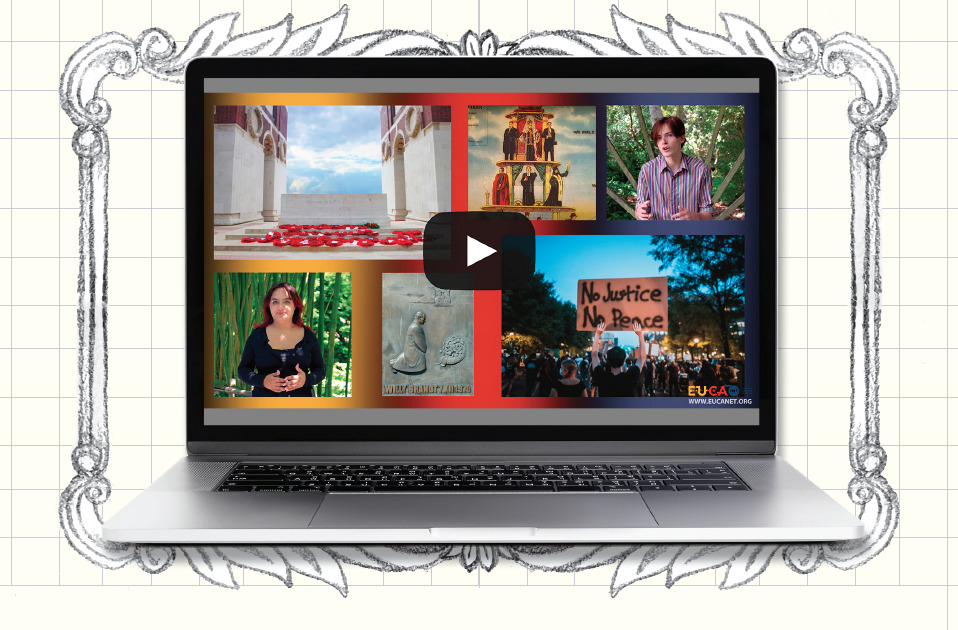 Check out the script of the video for now:

“Political leaders  talk  about ‘history’ a lot. It is hard to think of any political issue today that isn’t cast in terms of a long, historic struggle.

But why? If you ask most people they’ll probably say that history is a record of what happened, a collection of events and facts. But if history is just a record  of facts, why is it so political? To put the same question differently: why does history matter so much for the present?

One answer is that history is a basis of our identity  and self-perception. Whether we realize it or not, people always identify as part of a long-term community, big or small, and this provides a feeling of belonging and shared experience. We all want to feel like we have roots somewhere, and without historical stories of the past or family recollections we remain socially and culturally adrift. This also applies to political communities: whether a political party, a nationality, or civic movement, history  defines what it means to be part of that community.

So history fuels identity, and because questions of identity are so politically charged (just think of debates surrounding race, gender, sexuality, and religion) history is political as well. Consider the example of immigrants; they are often perceived as ‘alien,’ because they are considered as being outside of a shared national or cultural story. This is a massive political issue, but it is also a historical one, as the status of an immigrant  group depends on whether they are considered separate from the dominant national history.

But how is it actually used for politics? How do politicians weave history into their speeches and policies / without just naming long-dead people and vaguely familiar dates? Well, often a person or group promotes specific interpretations of history over others or actively suppresses uncomfortable historical facts and events. Both government and ordinary people play a role in this process of choice and interpretation, it happens constantly. *This process is called memory politics.

For example, in Poland the current governing party, Law and Justice, has taken steps meant to embrace a specific patriotic vision. The parties’ vision says that Poland is an innocent victim with no involvement in the Holocaust. This vision is not only historically misleading (there were Poles who were implicated in the Holocaust as in other countries) but it has divided Polish society and destabilized its relationship with neighbouring countries.  This phenomenon is not unique to Poland, however; it happens all over Europe.

In France, for instance, in the 1990s, the highest political authorities began for the first time to accept responsibility for collaborating with the Nazis. The history of France continues to be portrayed as an example of human progress and historical grandness.

Former US president Donald Trump [pic of Trump] is another example of Memory Politics in action. By claiming ‘Make America Great Again,’[pic of Trump campaign]  he is implying that the country has failed, and that they were greater in their past.

This message empowers a lot of voters, but it also creates a debatable expectation that returning to a past status quo would make things better. And it invites ideas of white supremacy by claiming that a whiter, ‘pre-racial’ America is superior. This is not only racist, it is deliberately ignorant, because it ignores the positive roles non-whites have always played in American society. These instances of memory politics can be dangerous, because they can get in the way of honest and open conversations about the past. Such conversations are one of the only ways to deal with past trauma. We see this in the US with the removal of confederate statues, but it happens in Canada too, for instance, with the debates regarding the commemoration and statues of Sir John A. Macdonald. MacDonald, Canada’s first prime minister, was heavily involved in setting up the residential school system across the country, and because of this people now wonder whether he should be celebrated. Or, look at the injustice that Indigenous people face all over the word – The discovery of the mass graves in Canada are not isolated events; they are both part of a long and ongoing history here in Canada. To only see them in political or narrative terms is a travesty, one that ignores the real human cost of residential schools.

Jade Roberts,  a First Nations Saskatoon educator, expressed this best when she said: “I want people to educate themselves and just to be listeners of our experiences because they’re valid,” “A lot of times we get kind of shrugged off like,  ‘it happened a long time ago and it doesn’t affect anyone anymore.’ And that’s not the truth.”

Clearly, stories of the past can be manipulated, and sometimes even misrepresented.  Because of this, we must watch for how historical narratives are used and who is using them.  We must be honest and confront the past and inform ourselves on dominant narratives.

Today, there are opportunities for our modern society to make meaning of the past and learn from it. For instance, acts of remembrance can help society heal from past injustices and create a roadmap for the future of both the political and historic landscapes.  Most often, these acts of remembrance are symbolic.

A memorable example, specific to German history, is the country’s former chancellor, Willy Brandt, falling on his knees at the former Warsaw Ghetto in 1970 to express his apology for the crimes of Nazis. Brandt said: “at the abyss of German history and under the burden of the murdered, I did what people do when the language fails.” But increasingly people and governments are calling for material reparations for past injustices. While large-scale historical reparations are still extremely rare, in some places, progress is being made.

For instance, in Australia the government has a subsidies program for Aboriginal communities, called the Stolen Generations Reparations Scheme. The scheme is named after the generations of Aboriginal children during the 20th century who were removed from their families and forced into religious schools and civilizing programs; with a fund of $11 million, the Australian government now offers support to Aboriginal individuals and communities.

Contemporary discussions about history acknowledge a spectrum of perspectives that are integrated into its stories and examples. Addressing history can spark controversy but it is also an avenue to collectively work towards a more hopeful and peaceful future. The goal of this video series is to address why history matters and why its meaning is so politically contested in Canada and in Europe.

We invite you to join the conversation on global topics such as: commemorating past injustices; immigration and historical memory; democracy; right-wing populism/nationalism as well as why European history matters in the Canadian context.”

Matt James gives a keynote on “The Politics of Reconciliation and Hatred...
Scroll to top