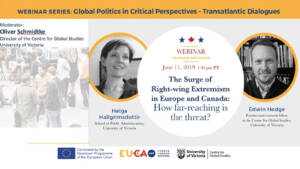 This webinar addresses the rise of far-right extremists in North America and Europe. These groups have become increasingly vocal in the political arena openly promoting nativist, racist ideologies and seeking to gain legitimacy in mainstream society. How far reaching is the appeal of such groups, how do they mobilize, and what risk do they pose for civic society and democracy?

This webinar addresses the rise of far-right extremists in North America and Europe. These groups have become increasingly vocal in the political arena openly promoting nativist, racist ideologies and seeking to gain legitimacy in mainstream society. How far reaching is the appeal of such groups, how do they mobilize, and what risk do they pose for civic society and democracy?

There is little doubt that the extreme right has seen a considerable rise in popularity over the past years: In the United States, the number of hate groups rose for the fourth year in a row in 2018; likewise violent attacks against immigrants and minorities are up considerably. Similarly, Europe has experienced a marked revival of militant right-wing extremist groups, networks, and incidents. And Canada is not immune to this trend: According to Barbara Perry, a professor at the University of Ontario and expert on hate crime, there are at least 130 active far-right extremist groups in (a 30% increase in 2015).

This webinar addresses the sources of the success of these far-right actors with a particular focus on their mode of political mobilization, strategies of communication, and effects on political culture. Two developments are of central concern to the debate: First, far-right groups have effectively sought to gain broader legitimacy and appeal in society. For this reason, they have toned down blatant racist rhetoric and violent behaviour. It is noteworthy and politically worrying that the divide between these extremists groups and mainstream politics has become far more blurred than in the past. Second, right-wing groups have been highly effective in communicating their message through social media channels, music and events. In the same vein, these groups have established an international network connecting the extreme right across Western democracies and developing a ‘shared vision’ for their nativist ideologies. How worried should we be about the rise of the extreme right; how severe is the risk to immigrants/ minorities and our democratic polity more broadly.

Helga Hallgrimsdottir joined the School of Public Administration in 2017. She is fellow at the Centre for Global Studies, a senior researcher for the project Borders in Globalization (BIG) and the current president of the University’s Faculty Association. Helga Hallgrimsdottir is a historical comparative sociologist, using history and comparison to get perspective on what human experiences mean. Prior to her appointment at the School, she was appointed to the Department of Sociology at UVic.

Edwin Hodge is a postdoctoral research fellow with the Borders in Globalization project at the Centre for Global Studies. Edwin’s sociological background lies in the areas of social movement theory, gender theory, and political sociology. His research interests include right-wing and traditionalist social movements, extremism, and white supremacist activism in North American societies. Edwin’s research has also included examinations of border policy, temporary foreign labour in the Canadian market, and the emergence of a-territorial networks of far-right activism.

Oliver Schmidtke is professor at the Department of Political Science and the Director of the Centre for Global Studies at the University Victoria. His research interests are in the fields of comparative European politics and contemporary history, European integration, migration, ethnic conflicts and nationalism/populism.

Hosted since 2005 at the University of Victoria, the EUCAnet.org project focuses on stimulating exchange on EU-Canada topics. With the support of the Erasmus+ Jean Monnet project of the European Union “Communication and Media Strategies for EU experts in Canada” and the Centre for Global Studies, the webinar series brings together experts in Canada with various stakeholders (students, practitioners, media representatives) to engage with ideas on critical issues of politics and policy making in Canada and Europe.

The Impact of the Migrant Crisis on Human Trafficking – Insights to the...