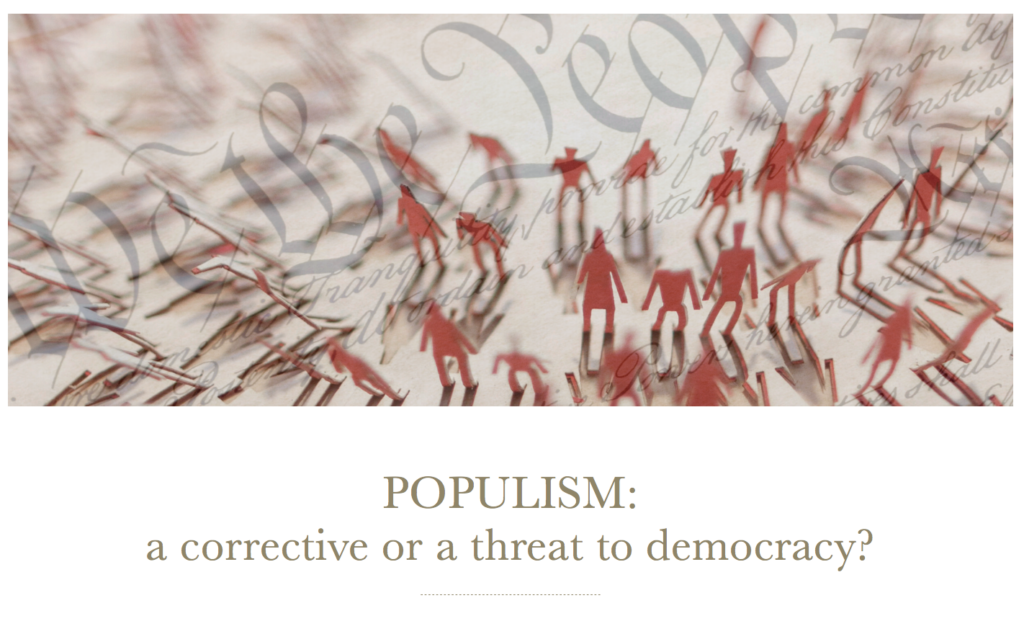 Ever since populism became a grave matter of concern in the Western world with the election of Donald Trump, the Brexit vote, and the electoral success of a number of European populist parties, there have been two primary responses to the current trend. The first – that populism poses a threat to the survival of Western liberal democracies; the second – that populism is a much-needed corrective to the shortcomings of these liberal democracies. While more nuanced analyses have acknowledged the merits of both lines of appraisal, most commentators have tended to lean one way or the other, sparking the debate that rages on today. As one minor contribution to this debate, I aim to call into question the framing of the debate itself. In doing so, I would like to put forward two questions that challenge some of our basic assumptions about the complicated relationship of populism and democracy.

To answer the first question, it may be appropriate to begin with an analogy. If a person dies from radiation pneumonitis as a result of chemotherapy, we do not ultimately blame the death on the radiation pneumonitis or the chemotherapy. Although medical professionals will log this final cause in the records, we know that when someone asks, “what happened to dear Jane?” the response will be, “Jane had cancer.” The common sense of the situation overpowers the finer details. We do not miss the forest for the trees.

When it comes to the relationship between populism and democracy, the common sense of the situation is that our Western liberal democracies have been a threat to themselves for a long time. In the last few decades, growing socio-economic inequality and class stratification, increasingly divided societies (both ideologically and demographically), and an aloof political elite that has failed to respond to these challenges with the big ideas and actions that they require have forced citizens to search for quasi-democratic alternatives, including populist leaders and parties. And why would they not? To begin with, democracy is not supposed to be compatible with the concepts of elites and masses. The political equality that democracy, as a principle, rests upon is to enable us to have a high degree of control over our individual and collective lives. This is why entrusting elites (whether elected or unelected) with this control is such a profoundly important political exercise. It is, indeed, a grand but also risky bargain. Rousseau warned us over two hundred years ago that the English are only free at election time. In exchange for this control (some would say our political equality itself), we expect that this elite – dedicated to the task of solving society’s most pressing problems – will, in fact, be able to do so.

The problem, as stated above, is that they have not been able to do so, at least not to the satisfaction of those to whom they are accountable. As a result, in our present day, not only is there no real political equality, there is thought to be no political quality either. Hence, the revolt of the masses, channelled through savvy political entrepreneurs who have been able to capitalize on anti-elite sentiments.

How familiar all of this sounds. For certain, it ought to sound familiar. After all, populism constitutes much of the political story of 20th and 21st century Latin America, Sub-Saharan Africa, and Southeast Asia and, in turn, the theories that comparative politics have generated from these experiences. It is remarkable, thus, how little these historical (and some recent) experiences of what we call the Global South have featured in discussions of populism and its impact on democracy in the Western world. It is even more remarkable when one considers that many of the current conditions are similar. The absence of stable liberal democracy in much of the Global South has often been attributed to a small middle class and/or a powerless working class. In North America and Europe, the middle class is shrinking and the power of the working class has declined. The absence of stable liberal democracy in many countries of the Global South has also often been attributed to the lack of fair and effective institutions for managing diverse (“divided”) societies. Many European governments gave up on attempts at “two-way street” integration in the early 2000s.

Given the increasing similarities, one must ask if the Global North-Global South distinction that we impose on the world and our discipline holds us back from learning meaningful lessons. One must also ask if some scholars of the Western world have simply been too smug to acknowledge that valuable lessons could be learned from these experiences.

Of course, there is much truth in the idea that, as a “return of the people” against an unresponsive, incompetent and sometimes corrupt elite, populism embodies the democratic spirit. Indeed, due to its initial horizontal and unmediated nature, it is arguable that it does so much more purely than with the vertical election of public officials or the vertical consultation between interest groups and government. As Ernesto Laclau states in On Populist Reason,  “democracy is grounded only on the existence of a democratic  subject, whose emergence depends on the horizontal articulation  between equivalential demands…So the very possibility of  democracy depends on the constitution of a democratic ‘people’.”   (Laclau, 2005)

Yet, while this might serve as a corrective in principle, it has not served as a corrective in practice. As the experience of the Global South has demonstrated, the political equality so central to the origins of populist movements – perhaps best understood as their “social movement” stage – generally gives way to reliance upon a new political elite, either an entrepreneurial individual or an alternative bureaucracy. In this sense, democratic deficits are not corrected.

Furthermore, populist leaders of the Global South have often shifted the foundations of their legitimacy from a legal-rational to charismatic basis. By appealing to a narrow support base of devotees posing as “the people” rather than the people as a whole, the populist leader is able to claim popular legitimacy above and beyond the law as well as to selectively reward those who support them. In this way, political equality and universalism – principles so central to the democratic ideal – are not corrected, but torn asunder.

Finally, the populist experiences of the Global South point to the fact that its politics is often framed in terms of destroying one’s enemies as opposed to vigorously competing with one’s adversaries. To use the language of Chantal Mouffe (against her own advocacy of populism), populist leaders and supporters have lacked agonistic respect – the tolerance for opponents necessary to maintain democratic input in a pluralist society (Mouffe, 2013).

To conclude, with Western liberal democracies failing to satisfy many of their citizens and populism not meeting the high standards of the democratic ideal, it is imperative that those who are committed to democracy devise a new alternative. While the form and style should be left to the imagination of its creators, it is necessary that this new movement, in its quest to find solutions to old problems (class inequality and divided societies), be committed in principle and in practice to tolerance, universalism, and true political equality through the popular control of collective life.

About the author: David Matijasevich (PhD, Carleton University, 2015) is a political scientist whose research interests lie at the crossroads of political theory and comparative politics. He is particularly interested in examining the challenges that extra-parliamentary political actors face when attempting to renew political arrangements along more democratic lines. In doing so, questions central to democratic theory, contentious politics and state-civil society relations have all been explored in his work. Although Matijasevich is interested in instances of popular mobilization across the globe, he is most fascinated by these developments in East and Southeast Asia, where such forms of politics often face significant limitations from both the state and society itself.

Prof. John Borrows: What Are The Greatest Challenges Populism Poses To Democracy?
0 replies

Dr. Valerie D’Erman on her interests in EU policies and trade
Scroll to top